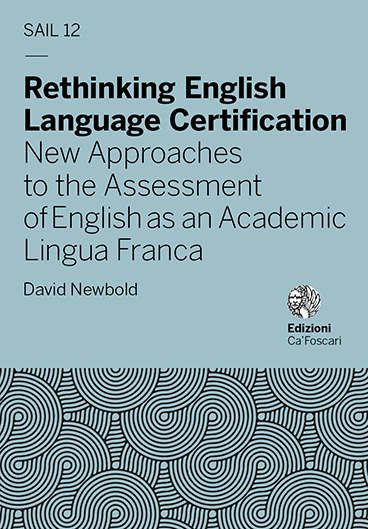 In chapter 4 we report on a ‘co-certification’, a project developed jointly by the University of Ca’ Foscari Venice and one of the best-known examining boards operating in Italy, Trinity College London. The rationale behind the project (which still today appears to be unique in its genre) was to adapt part of an existing international certification, Integrated Skills in English (levels B2 and C1) to suit the needs of a local institution: in this case, by introducing writing tasks which were more appropriate for Italian university students than the generic, ‘politically correct’ tasks for the international market. The project, which continued in its original form from 2004 until 2014, was doubly attractive to candidates, not only for reasons of content validity, but because of its dual function, since it could be used both as an external certification, but also to replace in-house university exams.

Copyright: © 2017 David Newbold. This is an open-access work distributed under the terms of the Creative Commons Attribution License (CC BY). The use, distribution or reproduction is permitted, provided that the original author(s) and the copyright owner(s) are credited and that the original publication is cited, in accordance with accepted academic practice. The license allows for commercial use. No use, distribution or reproduction is permitted which does not comply with these terms.