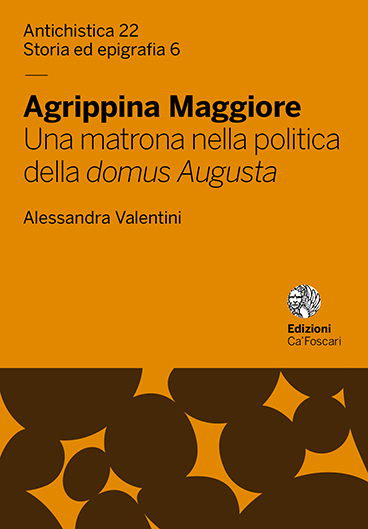 On October 18th of 33 AD, after five years of confinement on the island of Ventotene, Agrippina the Elder, Augstus’ niece, Germanicus Caesar’s wife, Caligula’s mother and Nero’s grandmother, died. At first she was a witness and then she assumed a leading role in the fight for the choice of the prince's heir, held up by a consistent group of supporters and animating the opposition in the Domus Augusta. In recent years scholars’ attention has been dedicated to the reconstruction of Augustus and Tiberius’ politics and to the organization of the groups animating the fight for the heir’s choice in the domus principis. To Agrippina the Elder, who assumed for decades a central role in the dynamics of the principate’s succession, scholars didn’t give specific attention, favoring, instead, the male perspective in the Augustan and Tiberian politics or the study of other women linked to men who assumed important role on the political scene. In a historical context in which the domus Augusta became the space of the political discussion and where women easily acquired spaces in the political field, Agrippina the Elder assumed an increasingly important role, acting in fields traditionally precluded to women and obtaining major possibilities to interfere in politics.

Copyright: © 2019 Alessandra Valentini. This is an open-access work distributed under the terms of the Creative Commons Attribution License (CC BY). The use, distribution or reproduction is permitted, provided that the original author(s) and the copyright owner(s) are credited and that the original publication is cited, in accordance with accepted academic practice. The license allows for commercial use. No use, distribution or reproduction is permitted which does not comply with these terms.