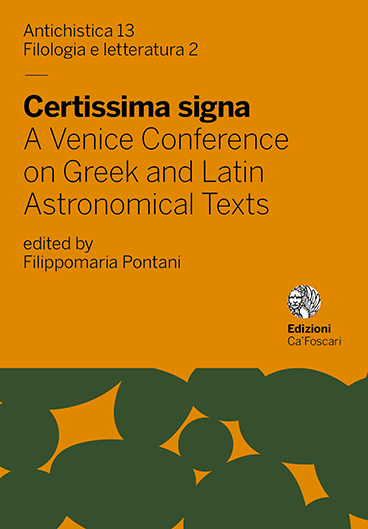 A Venice Conference on Greek and Latin Astronomical Texts

The observation of the stars has never just been a matter of ‘science’, but has constantly interacted with other domains, such as philosophy, literature, medicine, religion, history and magic. Consequently, the history of astronomical writings involves very diverse skills and, therefore, calls for a cooperation between scholars. The present book represents such a shared attempt to investigate ancient, medieval and Renaissance astronomical texts, with a special focus on their transmission in manuscripts and prints, the relationship between texts and images, and the Nachleben of the Greco-Latin tradition in later Western culture.

Copyright: © 2017 Filippomaria Pontani. This is an open-access work distributed under the terms of the Creative Commons Attribution License (CC BY). The use, distribution or reproduction is permitted, provided that the original author(s) and the copyright owner(s) are credited and that the original publication is cited, in accordance with accepted academic practice. The license allows for commercial use. No use, distribution or reproduction is permitted which does not comply with these terms.