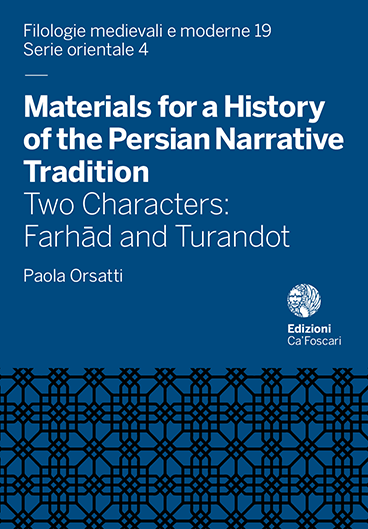 This book gathers together two essays. The first deals with the origins of the character of Farhād, the unlucky lover of Shīrīn, who – in the Persian narrative tradition – digs a route through Mount Bīsutūn and accomplishes other admirable works. The essay suggests that Farhād, as we know him from long narrative poems, historical chronicles, and reports by geographers and travelers, is the issue of a conflation between the legendary character of the Master of Mount Bīsutūn and a historical personage, Farrahān, the general-in-chief of the Sasanid king Khusraw II Parvīz’s army (r. 590-628 EC), as this figure was re-elaborated in a number of later legends. The second essay identifies a character named ‘Būrān-dukht’ as the prototype from which Turandot, the heroine of the tale well-known in Europe from Puccini’s opera (1926), springs. Two historical personages, both called Būrān or Būrān-dukht, are relevant in this line of development: the first is the daughter of the Sasanid king Khusraw II Parvīz (r. 580-628 CE), who was queen of Persia for a short period (630-631 CE); the other is the daughter of Ḥasan b. Sahl, wife of Caliph al-Maʾmūn (813-833 CE).

Copyright: © 2019 Paola Orsatti. This is an open-access work distributed under the terms of the Creative Commons Attribution License (CC BY). The use, distribution or reproduction is permitted, provided that the original author(s) and the copyright owner(s) are credited and that the original publication is cited, in accordance with accepted academic practice. The license allows for commercial use. No use, distribution or reproduction is permitted which does not comply with these terms.