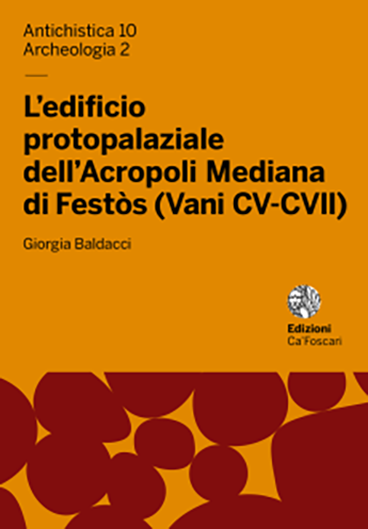 The present book consists in the full publication of both the structures and related finds excavated in the Protopalatial building located at the southern slope of the so-called Acropoli Mediana at Phaistos, ca. 100 m West of the Palace (Rooms CV, CVI and CVII). This building was the object of a rescue excavation, carried out by Doro Levi in 1969 and 1971. Despite being only partially preserved, it stands out (a) for the extensive size of Room CVII, characterized by a long and impressive bench, (b) for the use of refined building materials and techniques, and (c) for the recovery of a few substantial and closed stratified ceramic deposits, that is, respectively, pottery Groups A, B and C, dated to the last phase of the building, and group E, earlier than the former as it was located beneath the slabs of a floor. In spite of the importance of the finds, Levi only cursorily reported the excavation in his major 1976 monograph on Phaistos; the ceramic assemblages, moreover, were only dealt with in a typological perspective in Levi and Carinci’s volume on the Protopalatial pottery from the site (1988). With the aim to solve some of the remaining uncertainties concerning both the architectural phases of the building and the chronology and function of the various pottery groups, the present author carried out a contextual study of the evidence available, taking into account also the unpublished pottery stored in the storerooms at the premises of the Italian Archaeological Mission at Phaistos. Therefore, the present study enabled her to reconsider the chronology of the pottery assemblages and accordingly that of the related architectural phases that was possible to identify; these, being four in number, span from MM IB to MM IIB. The analysis of Group E, dated to MM IIA, made it possible to assess both its nature and composition: originally, it quite probably formed a floor assemblage, that was discarded on purpose and sealed under the slabs, in order to memorialize the event or the context in which it had been used. Moreover, the contextual study of the architectural and ceramic evidence pertaining to the last phase in building’s life (MM IIB) suggests that it was devoted to some official function. Against such a framework, it becomes possible to make sense of its outstanding reception features, that provided seating for a high number of people. Judging from the analysis of Groups A, B and C, such a complex was mainly connected to community drinking practices.

Copyright: © 2017 Giorgia Baldacci. This is an open-access work distributed under the terms of the Creative Commons Attribution License (CC BY). The use, distribution or reproduction is permitted, provided that the original author(s) and the copyright owner(s) are credited and that the original publication is cited, in accordance with accepted academic practice. The license allows for commercial use. No use, distribution or reproduction is permitted which does not comply with these terms.