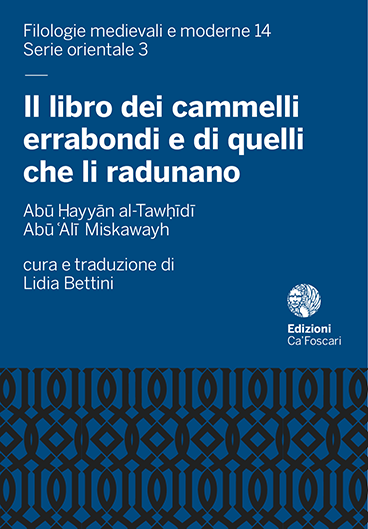 This book presents the first unabridged translation of Kitāb al-hawāmil wa-al-šawāmil – a work containing 175 questions asked by Abū Ḥayyān al-Tawḥīdī and the related answers given by Abū ʿAlī Miskawayh – into a European language. It was composed at the end of the tenth century and belongs to the period of the complex acclimatisation of the philosophical and scientific Greek tradition within the Muslim Arabic milieu. The questions – which broach philological, literary, ethical, philosophical and scientific themes, together with those related to custom – possess the eclectic nature and literary style of the adab, whereas the answers lie within the technical domain of the falsafa, in its double dimension of ethics and logics. The dialogue takes place between peers: then, given the relative brevity of the answers and the wide variety of the themes, the peculiar nature of the work is the network of intertextual relations and references, which are quite often only allusive, to the heritage that was common to the intellectuals of the time, i.e. Artistotle’s, Plotinus’, Galen’s or Plato’s revised thought, in a milieu in which cultivating medicine, mathematics, astronomy, music, and perhaps even alchemy, together – and, above all these sciences, philosophy – was normal. Miskawayh was not an original philosopher and the book is not a philosophical treatise but, if we go through its interconnections, not only do we grasp its scattered allusions, but we also understand how an organic system of interpretation of the universe – which is, for example, comparable to Fārābī’s –, although not clarified, is always an implied point of reference. The considerable apparatus of footnotes tries, as much as possible, to provide the references, which were made anonymously or summarily by the two authors, with a context, in the belief that, in order to have an idea of the cultural depth of a work, it is necessary to know what it refers to and how it does it.

Copyright: © 2017 Abū Ḥayyān Al-Tawḥīdī , Abū ՙAlī Miskawayh. Lidia Bettini. This is an open-access work distributed under the terms of the Creative Commons Attribution License (CC BY). The use, distribution or reproduction is permitted, provided that the original author(s) and the copyright owner(s) are credited and that the original publication is cited, in accordance with accepted academic practice. The license allows for commercial use. No use, distribution or reproduction is permitted which does not comply with these terms.