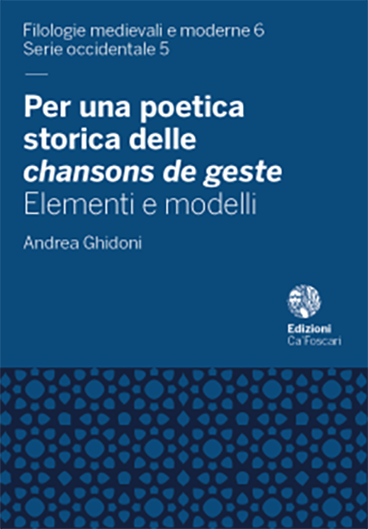 An innovative model for the formation of the genre of the chansons de geste in the eleventh-century France should focus on the concept of genre and conceive itself as a historical poetics. This approach will not take in consideration individual legends, but it will study how heroic narratives were transformed by the literary tradition of the first chansons de geste. We cannot exclude the presence of very old materials (imagery, patterns, characters) that survive even in medieval poems, but these are dissolved and processed within the formal and structural frame of the medieval poetics and the Carolingian chronotope of the chansons de geste. The matter of the French epic – a mass of polymorphic legends and texts, not able to set up a firm literary tradition before the genesis of the chansons – through the first poems is in a certain sense reworked and canonized. The traditional models of the origins of the genre, the individualism and the traditionalism, fail to consider an approach to the genre: they are inclined to identify the stages of single legendary or poetic traditions; they explain, with different perspectives, how, for example, the legend about Roland evolved, but not what distinguishes specifically a chanson de geste from other coeval vernacular heroic narratives, in terms of poetic techniques and rhetorical formulas, imagery, patterns, characters: this is instead the perspective of a historical poetics. The neologism ‘proto-gestic’ tries to label the materials preceding the chansons, not from a chronological point of view, but because they reflect a previous formal phase: it is an unstable mass of legends and texts, loose traditions and poetic narratives; the first chansons were a portion of them that gradually gained importance and imposed a traditional form for the heroic epic with Carolingian background. In practice, the model presented is an individualism of the texts, according to which a few texts – a population of texts, in biological words – forged in a limited area (possibly, the Loire Valley) would have contributed to the definition of a more and more standardized form for the epic texts, through mutual imitation: these texts can be invested with a kind of rôle directeur in the process of the definition of the verbal means of the chansons and of their Carolingian chronotope, on which they are based and to which they always do reference.