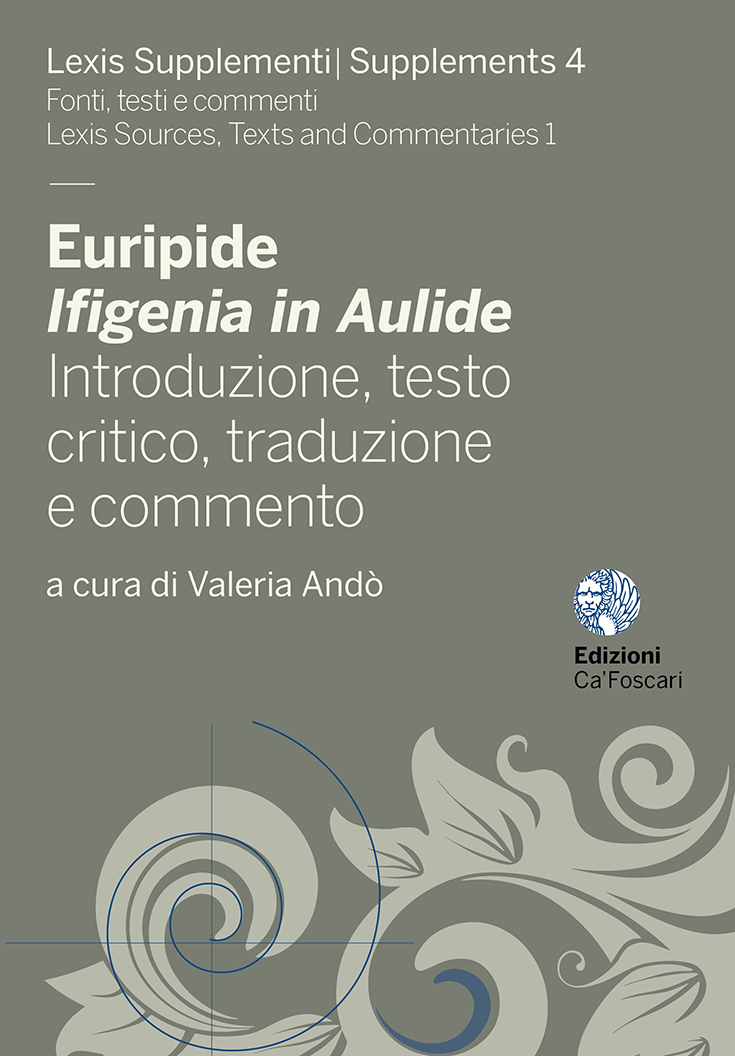 This volume contains the first Italian critical edition with introduction, translation and commentary of Euripides’ Iphigenia in Aulis. The tragedy, exhibited posthumously in 405 BCE, stages the first mythical segment of the Trojan War, namely the sacrifice of Iphigenia, daughter of king Agamemnon, head of the Greek army, in order to propitiate the winds that should lead the navy to Troy. A tragedy of intrigue and unveiling, in which all the characters try to oppose the sacrifice, judged to be an impiety despite its sacred essence. It is therefore a tragedy without gods, in which characters of modest moral stature move, unstable, ready to sudden changes of mind, and among whom the protagonist stands out: the girl who, having overcome the dismay for the destiny awaiting her, voluntarily moves towards death on the altar, for a flimsy patriotic ideal and with the illusion of achieving immortal glory. Since the end of the eighteenth century, the text of this tragedy, handed over to us by the manuscript tradition, has been exposed more than others to a rigorous philological criticism that has broken its unity, through considerable expunctions of entire sections and sequences of verses. The volume traces the phases of this critical work, showing its methods – and sometimes its excesses – and choosing a balance line in the constitution of the text. The overall exegesis of the tragedy, which I propose in this study, consists in the belief that, despite the exodus being spurious, the finale, in view of which the entire dramaturgy was composed, still had to contemplate Iphigenia’s salvation. In fact, if the Panhellenic ideal of defence against the barbarians is now meaningless, and if a war of destruction, to begin with, needs the death of an innocent person, then this death must be transcended and the horror of human sacrifice must dissolve. It therefore seems that, once political current events become opaque, the poet’s research tends to create situations of great patheticism in an aesthetic setting of refined beauty.

Copyright: © 2021 Valeria Andò. This is an open-access work distributed under the terms of the Creative Commons Attribution License (CC BY). The use, distribution or reproduction is permitted, provided that the original author(s) and the copyright owner(s) are credited and that the original publication is cited, in accordance with accepted academic practice. The license allows for commercial use. No use, distribution or reproduction is permitted which does not comply with these terms.