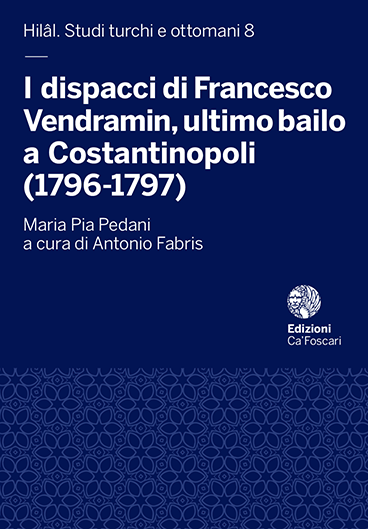 The transcripts of the 55 dispatches written by Francesco Vendramin, the last Venetian bailo of Constantinople between 1796 and 1797, appear very important to the eye of the historian. Even though they were written in Constantinople, they reflect the hardships of the political climate that the fall of the Veneta Repubblica and the establishment of the Municipalità Provvisoria brought to Venice.

Moreover, they provide a unique insight into the bailo house in Constantinople. Vendramin had to explain the functioning of the bailaggio and the necessity of the diplomatic office to maintain a decorum of credibility for the State (both the Repubblica and the Municipalità). This needed to be clarified to the new rulers, who were mostly bourgeois and not experts in political issues, especially issues of an international nature, while the old rulers, the august senators, have been experts for decades in both internal and external political affairs of the Republic.

The first 27 dispatches were written when the Veneta Repubblica was still alive. The remaining 28 were written after its fall (12th May 1797), when Vendramin had no official role. He was accredited with the Porta Ottomana, as the Venetian delegate of the Doge, but he never received any formal task by the Municipalità. Nevertheless the Ottoman government continued to consider Vendramin as an ambassador, not knowing how to act otherwise.

The first collection of dispatches again proposes, with proper adjustments to the new situation, the schemes and the themes that characterize the Venetian-Ottoman relationship in the modern age. The second group is full of information on the Venetian colony in the Empire. As a consequence, it gives information on the functioning of the consulates and on the personal licenses given to merchants and vendors. Moreover, the figure of the French ambassador du Bayet appears strong. He stands as a supporter of many choices in the name of an effective French supremacy on Venice, that in Constantinople is shown without the shield of the Municipalità.