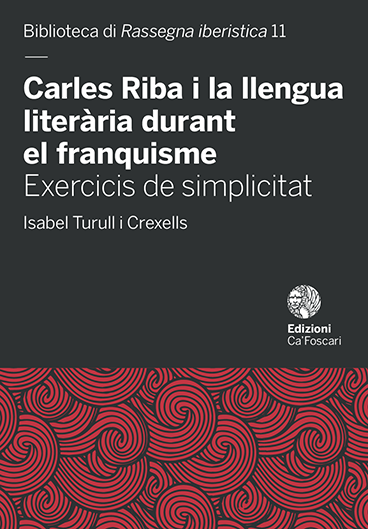 Carles Riba, one of the most relevant personalities in Catalan letters, not only as a poet but also as a linguist, has been considered a difficult writer. This book aims to examine how his theoretical preparation and his ideas in linguistics influenced his work in the particular case of some early stories in which he tries “uns utilíssims exercicis de simplicitat”. Carles Riba did not present his linguistic theories in a single text in a complete and articulated way but we can evaluate them in various papers he wrote and published up until his death in 1959. The first part of this work, after an introduction which sets the author in the context of European linguistics, is a review of the ideas that can be found in the collections of essays: Escolis i altres articles (1921), Els marges (1927), Per comprendre (1937), ... més els poemes (1957), and in a few other particularly interesting papers.

This part focuses also on some of the controversies in which Carles Riba is involved as a linguist during the spanish dictatorship: especially his role on the publication of the second edition of Pompeu Fabra’s dictionary in 1954 and the consequences of the prologue he wrote for the volume. Joan Coromines considers an attack on the linguist Pompeu Fabra the negative comparison Riba proposes with the honnête homme: in our research we re-evaluate this consideration and analyse the historical and semantic value of this expression belonging to 17th-century French culture.

The second part of this paper is a strictly linguistic analysis of three texts, chosen among Carles Riba’s works for children. The interest of those texts is in the author’s deliberate intent of using the most simple language, which enables us to determine what he considers the basic aspects of linguistic quality. Furthermore, the existence of different editions of those texts permits a philological analysis of those versions showing Carles Riba’s ‘simple’ language in three very representative moments, from the beginning of his career as a writer to the difficult situation during the dictatorship.

Copyright: © 2018 Isabel Turull i Crexells. This is an open-access work distributed under the terms of the Creative Commons Attribution License (CC BY). The use, distribution or reproduction is permitted, provided that the original author(s) and the copyright owner(s) are credited and that the original publication is cited, in accordance with accepted academic practice. The license allows for commercial use. No use, distribution or reproduction is permitted which does not comply with these terms.