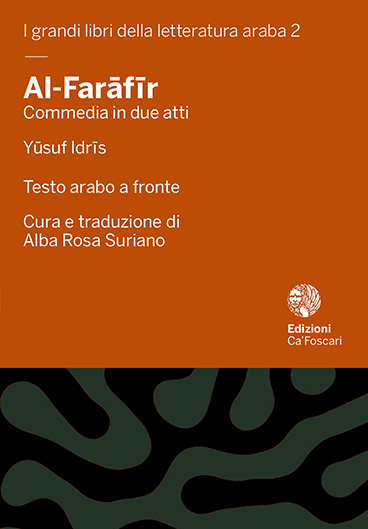 Commedia in due atti

Based on the Hegelian dialectic of the servant-master, this comedy represents, with the sarcasm and irony typical of its author, a profound reflection on the relationships between human beings. Starting from the local, with a pungent criticism on the social and political condition of Egypt in the Sixties, the two protagonists Farfūr and the Master guide and involve the spectator in a consideration on humanity and on the meaning of life that reaches universality. Divided into two acts, the comedy has no precise indications about time and space, which is confused with the time of representation, also thanks to the involvement of actors who are among the spectators. Discussing each other on names, trades and interpersonal relationships, the two protagonists criticise corruption, poor management of public health, social inequalities, but also the intellectual class that fails to give answers to people’s practical needs. The division in two of human society is even more evident with the second act, when the author’s reflection moves towards the existing organisational and economic systems, dismantling the complexity and reducing them again to a mere servant-master relationship. The other characters of the play are functional to the discourse of Idrīs: wives and children, spectators-actors and especially the figure of the author, who gradually disappears and abandons his own creatures to their fate.

Copyright: © 2018 Yūsuf Idrīs. Alba Rosa Suriano. This is an open-access work distributed under the terms of the Creative Commons Attribution License (CC BY). The use, distribution or reproduction is permitted, provided that the original author(s) and the copyright owner(s) are credited and that the original publication is cited, in accordance with accepted academic practice. The license allows for commercial use. No use, distribution or reproduction is permitted which does not comply with these terms.

al-Farāfīr. Commedia in due atti