Masters, Texts and Sources of the East | Volume 1 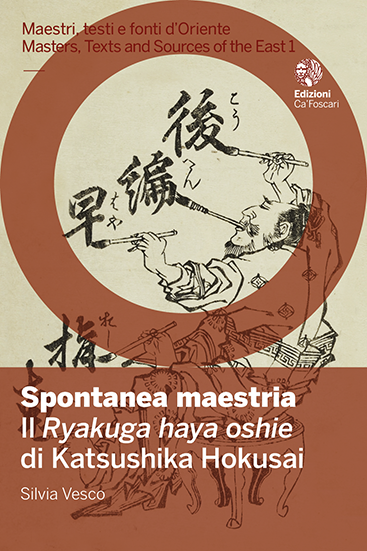 The appearance of Dr Vesco’s translation and study of Hokusai’s Ryakuga haya oshie, together with a full reproduction of the original book, is a matter of great excitement in the field of Japanese Studies.

Hokusai has been known in Europe and North America for some 150 years. In his own country, he came to public attention about 1800, with youthful work produced under the name of Shunrô. He lived to the advanced age of 88, and when he died in 1849, he was one of the best-known artists in Japan. He was soon to be the best-known Japanese artist in the West, a status that he probably still holds. ‘Under the Great Wave off Kanagawa’ – often referred to simply as ‘Hokusai’s Great Wave’ (from the Thirty-six View of Mt Fuji) – is said to be the most immediately-recognisable piece of graphic design worldwide. Hokusai was a townsman living in a socially stratified society. He was not a member of the elite, though other famous artists were. He did neither depict elite topics, nor work for elite clients. Rather, Hokusai associated with the ‘Floating World’ (ukiyo) that is Edo’s leisure-time distractions. He also made views of his city, its surroundings, and the wider Japanese countryside, but he was not a great traveller, other than in his mind.

Rather unrecognised is what Dr Vesco now brings to our attention. Hokusai saw his role as promoting the practice of art. Of course, he had his students, but as we see here, Hokusai also published out-reach volumes, aimed at introducing the joys of picture-making to amateurs who were not being formally instructed. The lessons were easy to follow, and also fun, as he reduced people animals and plants to basic shapes and formulae. Starting with the auspicious subject of Tang lions (kara shishi), Hokusai leads us through a range of topics, down to the demotic, such as clothes washing.

Readers today will certainly find a smile crossing their face as they look through the pictures. Thanks to Dr Vesco’s careful translations, we can also understand the advice and commentaries supplied in Hokusai’s accompanying texts. An additional feature of Dr Vesco’s work will be of assistance to more specialist readers, as she has transcribed the original Japanese. This was no simple task, as it is written in abbreviated calligraphy (kuzushiji). At all levels, readers, art enthusiasts and those who love to create pictures will now have access to Hokusai’s most important study aid. We can delve into it, copy from, and chuckle at, just as people did when the volumes first appeared. Western readers might ponder something else: Ryakuga haya oshie appeared in 1812, as European countries were tearing themselves apart.

Copyright: © 2020 Silvia Vesco. This is an open-access work distributed under the terms of the Creative Commons Attribution License (CC BY-NC-ND). The use, distribution or reproduction is permitted in unadapted form only and provided that the original author(s) and the copyright owner(s) are credited and that the original publication is cited, in accordance with accepted academic practice. You may not use the material for commercial purposes. No use, distribution or reproduction is permitted which does not comply with these terms.