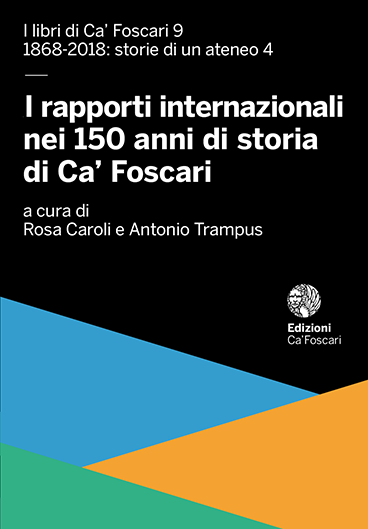 Since its establishment on the eve of the inauguration of the Suez Canal (1869) opening up the route for a privileged sea passage towards the Orient – as it was then called – the Royal High School of Commerce of Venice adopted the ambitious and farsighted policy of making it ‘unique in its genre’ by promoting the teaching of foreign languages, particularly the teaching of Oriental languages. The launching of a Japanese language course taught by a native speaker five years after the School’s creation inaugurated a season of relations between Ca’ Foscari and Japan. The year of the Venetian School’s foundation coincides with the beginning of the Meiji period in Japan (1868-1912), which saw its transformation into a modern and industrialised country. The Regia Scuola also entertained direct and indirect relations with similar schools in Japan, exchanging alumni’ bulletins and scientific publications with them. Many students of Japanese in Venice would spend periods of time in Japan, while native Japanese instructors in Venice, once back in Japan, would transmit knowledge acquired in Venice, sometimes even becoming teachers of Italian in Japan. Scholarships for commercial practice allowed some Venetian alumni to reach Japan, while others were hired by new Japanese educational institutions or attached to the Italian diplomatic and consular missions in Japan. Most of them maintained close ties with Ca’ Foscari by sending postcards, photographs, letters and often detailed reports on Japan to their alma mater, thus helping to increase knowledge of a far and still little-known country, in Venice as well as in the rest of Italy. Young Japanese scholars and prominent professors visited the Regia Scuola, often documenting memories of their Venetian experience in their writings. Following the traces left by some of these characters, the essay aims at reconstructing the many threads of the relationships between the Regia Scuola and Japan in the first six decades of its foundation.

Copyright: © 2018 Rosa Caroli. This is an open-access work distributed under the terms of the Creative Commons Attribution License (CC BY). The use, distribution or reproduction is permitted, provided that the original author(s) and the copyright owner(s) are credited and that the original publication is cited, in accordance with accepted academic practice. The license allows for commercial use. No use, distribution or reproduction is permitted which does not comply with these terms.